The Intelligence of Structured Water 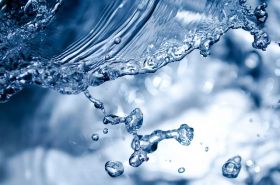 It all seemed to have begun when the movie What The Bleep Do We Know? exposed the world to the wondrous workings of Masuro Emoto and his discovery within the field of water. Who would have ever believed that water holds memory, a kind of cellular intelligence. That's what Emoto discovered when he looked through his microscope and found that water that had been told different messages or gone through certain processing plants had taken on different forms. Good messages held miraculous looking snowflake structures while bad messages or water from certain city tap systems were distorted, ugly and basically structureless. That's where the new creation of Structured Water Units comes into play which are water filters that actually restructure water back to health. It has been discovered that you can restructure water just like how water running down a river or through a spring structures water. The Structured Water Unit not only reprograms your waters intelligence it also pulls the toxins like chlorine and fluoride into the water molecule so that you don't absorb these things. If you go to www.structuredwaterunit.com you can watch a really good video with the creator of the Structured Water Unit. You will learn all about the wonderful world of structured water. If you are like me and are hooked on the TV series Lost, then you probably like the concept of space and time travel. This topic has been debated over for decades and I find it to be incredibly fascinating. Is it possible to create portals that allow us to travel or at least transmit and receive information from different regions within the space time continuum? I say yes. I believe that if you can somehow create a vortex point within our dimension you can peep out into the dimensions around us and via those dimensions you can travel, transmit or receive information from different points within the space time continuum. Now I know that I don't have a physics degree so whatever I say here could easily be ignored and possibly shut down, but please allow me the space to have some fun.

I believe that water is one of the most powerful forces on this planet. If water is put into certain circumstances I believe it is capable of creating the type of vortex or portal that allows us to transmit or receive information from other dimensions. One type of circumstance could be the structured water scenario. When water passes over a particular geometric shape like the ones in the Structured Water Units, it then begins a vortex type spin state which allows the water to become structured. It is the same phenomenon that occurs when water runs down a river and hits particular boulders.

Does this mean that you can time travel using a Structured Water Unit? Probably not. But will your water receive information from another dimension? Possibly. Of course I don't have the expertise or the scientific resources to prove it but it's still a fun concept to think about.

Michael Phelps Smokes Pot. But What About All That Chlorine He Swims In?

Some people were concerned when Michael Phelps got caught smoking pot, but why isn't anyone concerned about all the chlorinated water he swims in? Chlorine is a powerful oxidant and is used in bleaching and disinfectants. It was originally discovered in 1774 by Carl Wilhelm Scheele. Scheele mistakenly thought it contained oxygen. Humphry Davy gave it its name in 1810 after insisting that it was in fact an element.

Though there is a limited body of research done on the harmful effects on the body and environment there is evidence that causes for a closer look. As a gas Chlorine has been found to have an adverse effect on the lungs and immune system. In the body there is certainly concern that Chlorine can be carcinogenic.

"The EPA has raised skin absorption of chlorine to its top 10 carcinogen Watch List."

"Showering is suspected as the primary cause of elevated levels of chloroform in nearly every home because of the chlorine in the water."

Chlorine can also be hard on the environment. Laboratory studies show that repeat exposure to chlorine in air can affect the immune system, the blood, the heart, and the respiratory system of animals. Chlorine is especially harmful to organisms living in water and in soil.

So what can you do to protect you and your loved ones from Chlorine? Well there are many water filters that you can install in your home to filter out Chlorine. The Structured Water Unit is great because it won't only protect you against Chlorine but other toxins as well. You can even use it to fill up your pool and then you can also convert your pool into a salt water pool instead of a Chlorinated one. But if you still want to use Chlorine in your pool, Structured Water requires less Chlorine for pools.

So if we are going to educate the public about toxins, maybe we should'nt limit ourselves to just illegal toxins.

Can't find a job due to the recession? Drink lots of water.

I can not emphasize it enough, when times are tough, you have to drink plenty of water. Why? Because when the body is stressed out it produces more adrenaline. Adrenaline is a hormone produced by the adrenal glands which the body makes in order to put us into a fight or flight mode for survival. The problem is that it takes more work for our kidneys to filter adrenaline. How can you help your kidneys do their job? Drink more water.

It is also important to get lots of rest and take good care of yourself. People tend to want to escape when times are tough. Now a good book or a movie is one thing, but going out and getting drunk every night is another. Not only are you dehydrating your body but you are making it even harder for you kidneys and liver to do their job. Not to mention all the money you are spending on alcohol. Sure it seems like a good idea at the time and you might laugh at my advice but take another look at this article the next morning. Then give me your comments. You will see then that I'm just looking out for you.

My 8 best tips for staying healthy

P.S. - You should also check out Green Lifestyles Magazine, they tend to have great articles about this stuff.

Have a wonderful day!