This post explores the topic of water memory. Water can hold information like a computer chip. Structured water can hold more memory because it is more efficient on a molecular level. A doctor named Jacques Benveniste conducted an experiment in which he diluted water containing allergens to the point that no more allergens existed in the water sample. However, upon giving the water sample to living cells, an allergic reaction was still seen.

There have since been other studies done to verify this published experiment. The water carried only the memory of the allergen and the effect was the same. Benveniste also noted in later experiments that vortexed or structured water held more memory than unstructured water. When a biological molecule is removed from its water source, it stops functioning. Only when structured water is added does the molecule repair itself. Unstructured water produces no results.

Pangman & Evans continue: “When water is structured, it not only has a greater capacity to store information (memory) but it also has the infrastructure to deliver the message with speed and accuracy. A growing body of scientific evidence confirms water’s role as an accumulator, transmitter, and transducer of energy patterns. New technology provides evidence of water’s capacity to store and amplify biologically significant information.”

It is thanks due to the scientific community and their ongoing research that we know more about water and water memory.

This post explores the topic of water turbulence. Turbulence causes water to be vortexed, increasing structure and capacity to hold new memory.

Many natural holistic products are made by diluting a concentrated substance and shaking it with each dilution so that the new water introduced gains the memory of the elixir. With its new memory, this water is ready to pass on its information to the receiving biological cell. Another thing that happens when water is shaken is that nanobubbles are formed. They are included in water’s structure and their “thin membrane” helps to keep the water’s memory intact and ready to send to cells.

With turbulence in water come vibrations: “Vibrational templates from sound, light, and subtle energy literally touch the surface of water, providing a template for the epitaxial transfer of information. Vibrations have the capacity to influence the structure of the entire volume of water just like any other solid template. Vibrational patterns (from sound, light, minerals, and even thoughts ) create structural patterns in water similar to the way sound frequencies produce structural patterns in sand. These patterns are specific and reproducible based on the frequencies used to create them…”

So there is a pattern or design in structured water as it carries information. Without turbulence as is seen in nature, water becomes dead and lifeless.

This post explores the topic of information in water. Water carries the information necessary for cells to function and for life on Earth to survive. This is the most powerful information because without it there would be no life.

Water’s vibrations continue to give us and the planet the attunement we need. As many scientists have stated, water is medicine. The health community is now starting to realize the true and complete healing powers of water.

Pangman and Evans point out how the process on a molecular level is very detailed: “Water molecules literally switch polarities over and over again as protons (hydrogen atoms without their electrons) are passed rapidly through the matrix of relatively static, hydrogen-bonded water molecules. This is called proton tunneling or jump conduction. Water is potentially capable of transferring vibratory information in this way with very little actual molecular movement. The only way this can happen is if water is in a liquid crystalline state. In this state, water has the ability to deliver frequencies for considerable distances at the speed of light.”

The power of information in structured water is tremendous. It has the ability to not only align the Earth but our bodies as well. As scientists in the past and present are finding out, the functionality and perfection of structured water is hard to beat.

Waves and Currents in Water 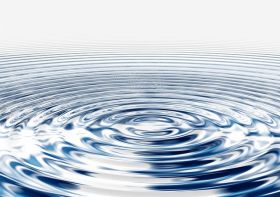 Waves and currents in water are part of a bigger energy rhythm of not only Earth but of the Universe. We see this pattern in seasons and migrations around the globe.

Waves or cycles have the tendency to repeat themselves in a consistent pattern as Casey Adams states: “While many cycles obviously repeat during our range of observation, many cycles have only recently become evident, indicating that many of nature’s cycles are beyond our current observation range.”

Ocean waves give energy to storms via atmospheric pressure and to the beaches they roll into with their tidal cycles. The waves we see in nature are just a small part of the universal wave cycle of energy: “These rhythms translate to electromagnetic energy and kinetic energy, which translate into elements of speed, distance, and mass. Momentum, inertia, gravity, and other natural phenomena are thus examples of the cyclical activities that directly relate with nature’s wave rhythms.”

In this way everything in the Universe is energetically connected, including water.

If we look at an ocean wave sideways, we can see that it spirals in on itself, rolling continuously until it hits an obstacle. This pattern of water spirals keeps occurring as the ocean’s currents continue to churn.

Water also spirals when it is being drained. Depending on which hemisphere the water is in, it may drain clockwise or counter-clockwise. The electromagnetic force variable is described here by Adams: “These waveform forces are precisely mirrored by the classic electromagnetic structure: As the electronic vector pulses forward in one plane, the magnetic vector pulses outward into another plane. This is expressed in nature by the formation of the spiral.” Since the Earth has north and south poles, water gets pulled to the left or right as it drains.

DNA, the pattern for life, is also a spiral form. By keeping in spiral form with the rhythm of nature, water increases its ability to carry information and function properly. Spiraling creates a cleansing vortex that allows water to structure itself, a very important process in nature. Without clean water, life on Earth would not last long.